Located in the exclusive area of Benahavis renowned for its Michelin star cuisine and luxurious properties, this development’s elegant residences are perfectly positioned for enjoying every aspect of luxury living on the Costa del Sol with the glamorous boutiques of Marbella and stylish marina of Puerto Banus under 10 minutes away and surrounded by some of the best golf courses in the area including El Higueral – a beautiful 9-hole course built along the banks of the Guadalmina river, as well as Los Arqueros and La Quinta.

The developments Residences & Collection is a unique development of refined two, three and four bedroom apartments and penthouses with spectacular south facing orientation and sea views offering the latest in technology and design. High spec qualities and finishings set these residences apart, using only the best materials throughout. If you are looking for luxury, contemporary, modern apartments in the heart of one of the best postcodes on the Costa del Sol, this development is the perfect choice.

Bahia de Banus is perfectly positioned walking distance to the beach and of course the marina itself. Finished in 2004 there are a mix of 2 and 3 bedroom villas and apartments built in a unique modern oriental style that is like nothing else on the coast. Security and facilities are of the highest standard, with immaculate gardens with Kai ponds, tropical landscaped gardens and flowing bridges and pathways. There is also a manned 24hr security patrol and high wall fence making residents feel totally secure while still being close to all the action of the bustling streets of Puerto Banus. There is also a gymnasium for exclusive use of the residents. All properties also include underground parking spaces. 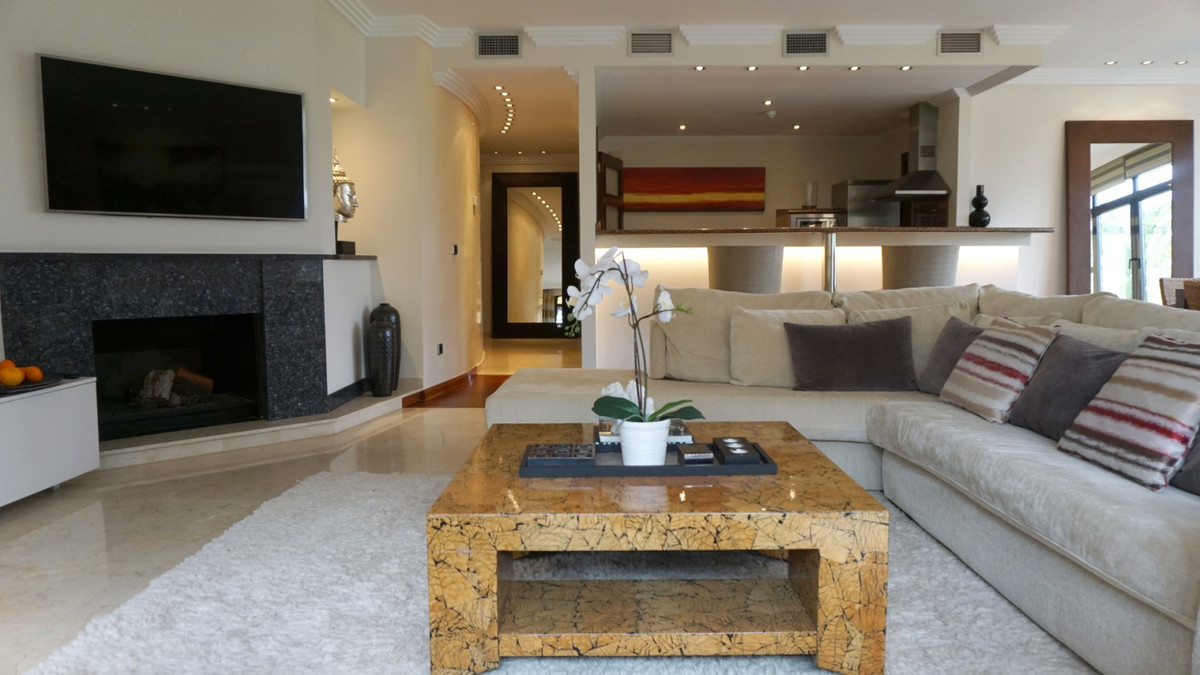 However the main features of the properties here are their proximity to one of the most highly regarded ports in Europe. With so many of the worlds rich and famous frequenting its streets every year its easy to see why real estate here is so highly regarded and why property so rarely comes on to the market in this development.

A fantastic new listing in the Bahia de Banus that we have is a two bedroom first floor apartment. The apartment is presented to a very high standard with a great terrace, There is parking and storage in the garage below. The apartment is priced to sell at €710.000.

Due to its almost unique style and location, properties here are rarely available and many of them are kept private and off the general markets books. We have a track record of not only showing properties for sale, but also renting out homes here too. So if a buy to rent type investment is your ideal, we are in the perfect position to help you get it let out quickly.

At present we have a number of properties for sale. Contemporary Polynesian style villas meters from the beach in one of the most demanded for areas of the coast. The location also makes it a highly demanded property for summer rentals.  These properties include features such as private heated pools and garden, excellent security. Distributed over 2 levels, with large rooms generously proportioned. En-suite bathrooms, tropical surroundings Jacuzzi bath tubs and lots more features you would expect in such a high quality urbanisation.

We currently have access to every property for sale in Bahia de Banus so contact us today.

We look forward to being of assistance to you!

Search for an up to date selection of long term rentals around Marbella with Marbella Long Term Rentals. The only company on the Coasta del Sol to offer full management of properties included in the fees paid by the owner.

Working closely with owners in areas such as Elviria to Estepona, but particularly around the central Marbella area. Now well established and the most recognisable name on the coast for  these types of homes.

Having been working in the field of rentals for almost 10 years, we have built a reputation on trust and standards. With a current drive for new property listings, we have a waiting list of qualified clients. All types of luxury property are considered in any of the main areas around our area such as Benahavis, Nueva Andalucia, Puerto Banus and San Pedro de Alcantara.

What type of people long term rent in Marbella?

We work with an incredible selection of people from all around the world. With the majority coming from Northern Europe, in particular England, Belgium and Switzerland to name but a few. Ages vary from 35 – retired.

Renters are open minded and we are lucky to have a range of properties to cover most budgets. Average prices start at around 1,000 euros per month for a 2 bedroom apartment but can reach much higher amounts depending on the size, style and locations.

Riverside is a beautiful development in the heart of the village of Benahavís. Consisting of 75 apartments, distributed in three levels and all of them with a car park space and storage room included.

The apartments are very ample and bright, built with the highest quality standards.

Find out more about Riverside Benahavis

La Quinta is located in Benahavis just a short drive up the Rhonda Road. It is home to a number of luxury villas and pretty apartments. It also has excellent travel links to San Pedro de Alcantara and Nueva Andalucia, both of which can be reached by car in around 5 minutes.  It is for these reasons that long term rentals in La Quinta are particularly highly sought after.

Features of the area:

Inside the resort are a number of smaller urbanisations, each individually designed and each with their own niche selling points. Whether its the spectacular views such as Altos de la Quinta, or a grand villa with its own private pool, we have the options for you!

What is currently on offer?

If you are looking to move within the next couple of months then you really should contact us and be put on the waiting list. While we always have property for rent here, due to its popularity, they can be sparsely available. We also have a number of off market options which we keep off the website for the privacy of owners. Only pre-registered clients that come directly to us will be able to see these properties so make sure you register today.

How much will I pay?

What should I do next? If you have decided that this is the place for you please make sure you get in touch with Marbella Long Term Rentals – +34 952 882 775

We have just updated our La Alqueria plots for sale page with two new opportunities. The area, in Benahavis, has over the past 12 month seen a large amount of investment in luxury residential real estate.  A number of property developers and private individuals purchasing these plots to build dream villas has been so lucrative due to the high demand in these types of luxury homes. Especially in the area of Benahavis which already has several world class resorts at its heart. Such as La Zagaleta, Los Arqueros and El Madronal to name but a few.

Typically plots in La Alqueria are hard to find and particularly desirable. Several of the plots enjoy spectacular sea and golf views, while others are very private and hidden away in the hills.

With a track record of sales in Benahavis of villas and indeed plots, our team are on hand with knowledge and experience in this field.

Prices for plots in La Alqueria start from around 425,000 euros.

Payment year in advance (can be 6/6 month)

Photos for all these apartments are below with more available upon request!

If you are considering purchasing a property in the Los Flamingos resort urbanisation in Benahavis / Estepona, then you should look no further than our friends at losflamingosfrosale.com

They are based very close to the resort and have the best selection of apartments and villas for sale across the entire complex.

Those who are already familiar will know that within the resort are a number of micro urbanisations, each with their own look and feel about them that distinguishes each location.

Some are super modern and contemporary design, with large windows and white walls. Others are much more traditional but each has one thing in common and that is their superior build qualities and overall location on the Costa del Sol.

So if you are looking to acquire an apartment in Los Flamingos, villa or perhaps a plot to build one yourself, look no further than Los Flamingos for Sale.

Marbella gives green light to the strategic plan of subsidies with an expected amount of 6.6 million

The mayor has detailed that this plan has an expected amount of 6,644,522.88 euros, divided into 3,359,132.88 for this year and 3,285,390 for the next. Romero explained that “The idea is to make a new plan that tests the needs of eligible policies in the municipality with a validity of four years ” and has pointed out that these grants “Do not limit the possibility of granting any assistance from Exceptional form outside its scope, in the case of an unforeseen need within this plan, must be accredited and motivated in a dossier on this matter “. However, you have specified that “The normal is that 99 percent of the subsidies that are carried forward are those provided in the plan “. This document will be made available to citizens on the municipal website once they have completed their processing, which has already passed through the Local Government board.

Similarly, within the subsidies section, a battery of AIDS has also been approved for this year, proposals from the tenure of mayor of San Pedro Alcántara to associations that have a strong social dynamics. Among other cases, there is the Fundatul Foundation, for which a subsidy of 26,250 euros has been raised for its program of protection and promotion of people with functional diversity, disability and situation of dependence, and of the Association of Deaf People of Marbella and San Pedro through an agreement for an amount of 12,111 euros to collaborate with the current expenditure of programmes and projects for the promotion of full equality and participation of deaf people in promoting their access to employment , education system and training.

Likewise, it will benefit from a subsidy of 12,000 euros for the current expenses of participation in sporting competitions of any field the Youth Sports Association (ADJ) San Pedro. Urban planning the Local Government board has also addressed an important number of urban planning records. In particular, 14 totalling the execution budgets of almost 12 million euros. Four of them have been records of modification of licenses and first occupations, among others, and another ten are recommendations of accounts of new works to be carried out-which amounts to almost 2.6 million euros of budget of material execution-, “and which gives Account of the dynamism of Marbella “said Romero. Finally, the Local government board has given a green light to the record for the award of competitive concurrency for the authorisation of the installation and use of a bar and three food and beverage stands at the Festival Marbepop 2018.

This delightful villa, with 5 bedrooms and 5 bathrooms, is situated in Urb. Elviria near Marbella, and is available for long term rental at a cost of €6,000 per month.

Designed throughout with style and flair to create a delightful space for relaxation, evoking the best of the baroque, but still retaining a contemporary edge.

On the ground level are the kitchen, lounge, dining area with table for 12 people, guest toilet and one double bedroom with en-suite bathroom, all leading to a beautiful and spacious terrace with sofas and a gas BBQ.

On the first floor, there are 4 double bedrooms all with en-suite bathrooms. The master bedroom has a lounge area and a beautiful bathroom. All rooms are individually decorated to a very high standard.

Just a great place to chill out and have loads of fun!